All the News on Music4Life

Total Instruments Delivered In case you haven't heard yet, Music4Life™ has delivered more than 3,000 ready-to-play musical instruments in our first 15 years to local school districts for use by students from income-qualified families.

Intended for use by the students of income-qualified families, each instrument must be returned when the student leaves the school district (due to graduation, family moves to another school district, etc.) so another student in-need can benefit from its use.

Local Music Teacher Cites Importance Occasionally, someone else describes the importance of Music4Life for students interested in instrumental music but whose families can't afford instruments. Here's a recent example:

"After teaching high school band for 30 years, I moved to teaching middle school this year. In the high school, most students provide their own instruments, however, at the middle school, that's not the case.

"Until this year, I had no idea what a critical role Music4Life plays in subsidizing the instruments the district provides. Holy cow. If it weren't for M4L, we'd have a lot of students who would not be able to play an instrument, or at least not the instrument of their choice.

"I am now only fully beginning to comprehend how much M4L contributes to the students in our school district, and I am in awe.

"THANK YOU to everyone who donates, repairs and provides instruments for our students. It matters."

Top-to-Bottom Evaluation Completed Music4Life recently commissioned the Ostara Group to do a top-to-bottom / inside-out review of what we do and how we do it. (Ostara is the prominent development consulting firm in Seattle that's done similar work for Cancer Lifeline, the Ballard Food Bank, Bloedel Reserve and others.)

Hundreds of financial and instrument donors, Chapter leaders and others were surveyed. Besides praising our efforts, respondents had several recommendations that we're implementing. You'll be hearing more about these in future editions of Quarter Notes. In the meantime, many thanks to all who responded, as well as to Ali Marcus, Adam Runions & Scott Sadler of Ostara. 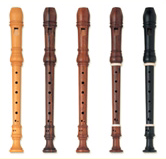 An entry-level musical instrument, the kids are learning to play their recorders and will be invited to Benaroya Hall to play them with the Seattle Symphony Orchestra in March. As part of the SSO's "Link Up" program with the Carnegie Foundation, this helps start any student on the road to an appreciation for music for life!

Another entry-level musical instrument is the ukulele, 78 of which have been ordered for Everett P.S. At a unit cost of about $75 each, the uk's have been purchased with a major grant from the Yamane Family Foundation.

We've been told that a ukulele concert is being planned for 7 p.m. on May 15th in Everett, so you might set that date/time aside to attend.

Brendan Smith runs the Seattle office of Lamar, which has provided communications support for several of our local events from the beginning. Lamar has now been asked to help us say thanks to those who provide financial support and musical instruments to Music4Life by running these billboards.

NOTE: Lamar provides billboard support on a space-available basis. Music4Life doesn't buy advertising from anyone so we can put maximum resources into instrument repairs for kids.